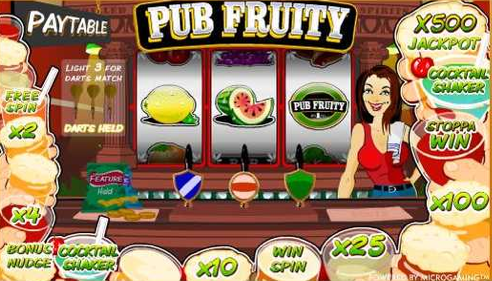 Pub Fruity is a classic Microgaming Fruit machine. It was the first they ever produced. Given its huge success, Microgaming got the confidence to produce other similar games and thus it can be described as the founding father/mother of Microgaming fruit machines.

It doesn’t take astrology to guess that the game has a pub-style fruit machine fused in a pub-theme. Due to its classic nature, Pub Fruit has three-reels and a single line slot format popular in the “good old days”.

The game screen is a typical traditional British pub complete with a barmaid and a game of darts. Pub Fruit has a Trail bonus game within its main game and a dart bonus in the second bonus screen, but we will look at this in details later.

Pub Fruit has a barely flexible coin size range with only four coin sizes accepted. They range for ten cents to $1 with each spin costing a coin. Since the highest possible win on the main game is 250x your bet size, it is recommended that you use higher coin values to increase your winnings.

The symbols have numbers that appear randomly. The random numbers are used to play the Drinks Trail Bonus game which can be seen moving anti-clockwise left to right at the top of the game screen.

For every spin that displays a randomly triggered number, you are moved the same number of moves indicated around the Drinks trail. If you happen to land a win, you are rewarded for that win. If you land an empty glass, you get nothing and the bonus feature.

Do the maths, make a maximum bet, and multiply it by 250 then by 500 (possible wins in the main game) then multiply it be 1,000 (maximum win on the darts). Who needs a progressive jackpot?