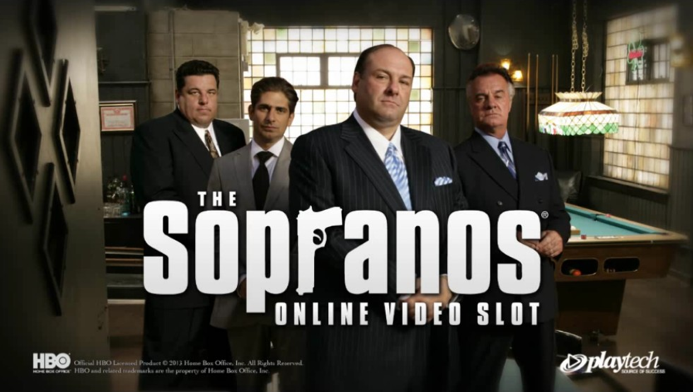 The Sopranos is a five-reel and 25 pay lines slot game developed by Playtech. The game is inspired by the popular American TV series going by the same name. The Sopranos is a story about Tony Soprano, an Italian-American Mobster. At one time, Sopranos was the bestselling TV series in the history of Cable Television.

Playtech has done an incredible job with the game graphics and sounds. All the main characters of Sopranos TV series make an appearance in this marvellous slot game. Expect to meet Tony, Johnny, Paulie, Christopher, Bobby and Artie.

Sopranos slot has one of the largest, if not the biggest, betting range in the history of online video slots. Betting starts as little as 25 cents to as high as AUD 1,500 per spin. This means that every Tom, Dick and Harry (I had to do that) can play this game.

When playing the base game, there’s a randomly triggered bonus feature known as Raid Bonus. During the Raid Bonus, you are given four envelopes with an instant cash prize of double your stake in each. You are expected to hide the envelopes in four separate hideouts; two of the hideouts will then be raided and the cash prizes stolen. You will however be credited with the un-raided envelopes.

The second bonus game in Sopranos is known as the Stolen Goods Feature. The feature is activated by landing the Stolen Goods symbol on the first and the fifth reel. You will then be ushered in a new window containing ten containers with instant cash prizes. Although the cash prizes are shown on the side, you have only three picks to make to win a cash prize.

Another bonus game in The Sopranos is the Bada Bing Bonus game. The game is activated by landing the three or more Bada Bing Bonus symbols on the second, third and fourth reels. In bada bing game, you must choose one of the five characters; Bobby, Artie, Christopher, Johnny and Paulie. Each of them will reward a different cash prize and organize a meeting with the Boss. After this feature, a video excerpt from the series is played. You might randomly get the chance to make a second choice for more instant cash prizes.

The feature starts with The Soldier Bonus round but players can unlock the other features of the game by filling three bars under every mode. This is possible by landing scatter symbols in the Base game. Every 4-5 scatters unlock two modes. The progress is recorded such that you can revert to The Family Free Games feature when you accumulate enough scatters.